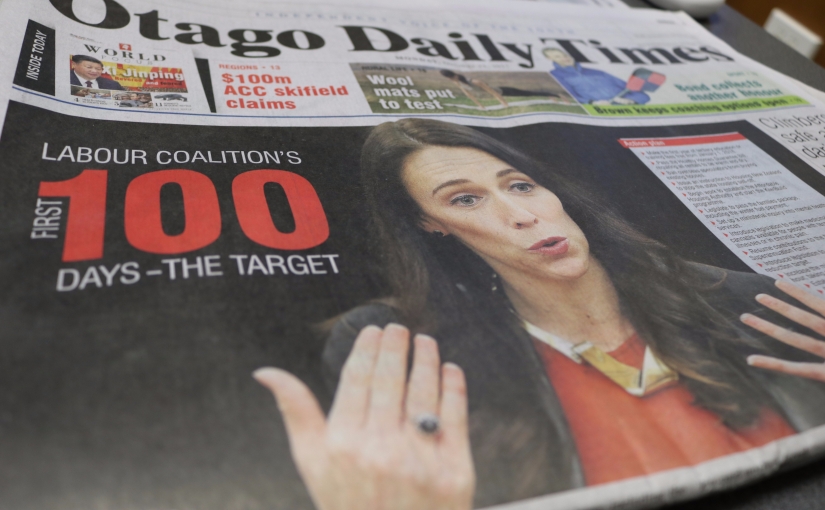 We were walking to the gym, it was sometime between 8 or 9 am. Across the street, we saw a cop in front of the Westpac Bank on George Street (Dunedin’s main street). We lowered our pace in hope for a little exciting bank robbery. Suddenly, three big men walked out, wearing sunglasses and headphone cables that disappeared in the suit. Behind them walking to the car – was New Zealand’s new Prime Minister (PM) who was currently campaigning for the Labour Party in Dunedin.

“Isn’t that her? Here, what’s her name?”, I asked Elkanah who was walking beside me.

Then it clicked in my head: “Jacinda Adorn, Ardurn, Ardern!”

One of her big guys opened the car door for her, and I, of course, was caught by what people call the Jacinda-Effect and cheered across the street: “Go, Jacinda! Whooohoo!”

“Thank you guys!”, she replied and gave us one of her big smiles. The big guys giggled and we surely made her day a little sweeter.

And now she is New Zealand’s new Prime Minister replacing Bill English (The National Party), which seems a bit difficult to understand since the National Party got most and almost half of all votes. So how come that Ms Ardern is now owning the throne?

Looking at the results of the September 2017 election, National (44.4%) led the field, followed by Labour with 36.9%. This is where the minor parties (NZ First 7.2% and the Green Party 6.3%) come in. The following negotiations resulted in a governing majority between Labour, NZ First and the Greens, leaving National to form the opposition. All of this is rather surprising for Kiwi politics since National and NZ First have a recent history. Maybe Winston Peters (head of NZ First) assumed from his experiences with female Labour-leaders that such relationship could only benefit him and his party, as it did back in the 2005 elections. Kiwi-legend Helen Clark, who served as PM for three terms from 1999 to 2008, chose NZ First to form a so-called “Confidence and Supply” – relation that made Peters the Minister of Foreign Affairs during that term.

There are two types of cooperation agreements: Coalition and Confidence & Supply. This time Labour chose NZ First to form a coalition, making both of them equal partners in government and Winston Peters the Deputy Prime Minister, as well as the Minister for Foreign Affairs (again). And that’s good for NZ First because it allows them high ministerial positions, even though they only achieved a fifth of Labour’s votes.

The Green Party, however, seems to be the third wheel in the governing trio because Confidence and Supply implies a rather distant relationship. Labour has the Confidence to have enough votes to form a majority and the Greens receive enough Supply (money) to pass budget limits. It still is a suitable position for the Greens since it is their first time in government and their leader, James Shaw, becomes the Minister for Climate Change. And where is the but? The Greens will only have ministers outside the cabinet.

The Cabinet (Te Rūnanga o te Kāwanatanga o Aotearoa) is vital in Kiwi politics. It is chaired by the PM, Ms Ardern, meets once a week, forms government policy and proposes bills that will, most certainly, be enacted by the parliament. Unlike German ministers, Kiwis are assigned to more than one ministerial responsibility. So there are people like Kelvin Davis, the Minister of Crown/Maori Relations, Corrections and of Tourism; Dr Megan Woods is Minister of Energy and Resources, of Greater Christchurch Regeneration as well as of Research, Science and Innovation; or Stuart Nash who administers the Police, Fisheries, Revenue and Small Business. I doubt that such mixtures are manageable for a single person but that is the way things run over here.

Kiwis adopted the German parliament system called Mixed Member Proportional (MMP) back in 1996 and since then fulfil it every three years (Germany every four years). Compared to Germany’s 598, the New Zealand Parliament has 120 seats to offer.

So Who is Jacinda Ardern then? Energetic PM, DJane and Cat-Lover

Jacinda Ardern is a child of the 80s, born in Hamilton, on the North Island. At the age of 17, Jacinda joined the Labour Party and worked for people like Phil Goff or even Helen Clark later on. In August 2017, she became Labour-leader and since Thursday, October 26 and 20 years after her first day for Labour, Ms Ardern is now the third female Prime Minister of New Zealand (and also the second youngest).

While the Greens think about a public referendum on legalising cannabis, Ms Ardern’s primary Government policy goals focus on immigration, monetary policy and the Reserve Bank. A little too late for me but she also said something about increasing the minimum wage (by almost a dollar). Labour does not support the Trans-Pacific Partnership as that would prevent NZ from banning foreign buyers from existing residential homes. For more on the first 100-days-targets, I recommend visiting the ODT-article from Monday, October 23, 2017.

Many Kiwis favour Ms Ardern due to the youthful influence and approach she is bringing/will bring to NZ politics. When I published my article in the student magazine, I came across an interview between Ardern and Critic-writer Joe Higham within the same issue. And after watching a couple of her speeches online, I could only agree with Joe: “She clearly isn’t the most capable orator in the nation’s political sphere, but in politics, a lot of the time it seems as though what is said doesn’t matter as long as the audience is captivated by the speaker, […].” In the article, he continued that Ms Ardern’s responses were not as expertly formulated as one might expect from a PM-to-be but Joe’s questions were answered: “…with such compassion, excitement, and hope that I [Joe] was captivated, […].”

And yes, Ms Ardern seems to be a person you want to hang out with. One of her hobbies is Dj-ing in record stores, at weddings and even festivals. DJacinda (I made that up) has her set on Spotify, starting with, of course, the Spice Girls. She also has a passion for pets – Paddles, the First Cat of New Zealand, to be specific. And you can follow Paddles’ “purrty special” life on Twitter. Maybe all of these hip and refreshing characteristics have brought Ms Ardern from “Wannabe”-PM to the most paw-erful woman in the country.

I don’t really know, but we’ll see. I mean, this is what the first 100 days are for, right? What I know is that Ms Ardern will benefit the government with her youthful influence, and certainly stand up for women’s equality (Did you know that female Rugby Players are not paid compared to their male counterpart? WTF). So it basically depends on the next three months, if the rest of the Kiwis jump on the Jacinda-train or not. One fact is for sure, the critics will be there as soon as she messes up. But I am confident that the combination of an energetic, young leader like Ardern and an experienced Winston Peters as deputy PM, not to forget, a strong National opposition, will (hopefully) result in the best possible outcome for New Zealand.