Maybe not the best weather to do a Springtime boat tour, but going aboard the Monarch is an opportunity, I wouldn’t let slip away so easily. Fortunately, I was able to join and assist the filmmaking students on this assignment. Get your waterproofs on ’cause it’s gonna get wet, we are going through the waters of the Otago Harbour.

To truly understand why Dunedin and the Otago Peninsula have the shapes they have to today, we need to go back in time – about 13 million years ago. Back then, the south of the South Island was almost fully submerged, until a hotspot in the mantle below Dunedin produced several volcanoes. Among them is the extinct shield volcano known as Rakiriri, which, with a lot of imagination, can be outlined on the above-linked map. Dunedin’s highest points, Mount Cargill (676m) and Buttar’s Peak (617m), were identified as the remnants of Rakiriri’s crater; the small water street between Port Chalmers and Portobello is believed to resemble one of the volcano’s vents. GNS Science provides volcano fact sheets, in case you want to read more.

I am constantly surprised by Dunedin’s dimensions, as driving a car to Taiaroa Head at the end of the peninsula takes almost an hour. In fact, Otago Harbour measures 22 kilometres in length. It is the longest natural harbour I’ve ever seen, although, it has been modified in the 19th century. The original shallow waters were dredged out enabling heavy ships to pass through. The waterway measures 76m in width and 7.6m in depth within the Upper Harbour – the section between Dunedin and Port Chalmers, and a width of 180m and depth of 12.2m from Port Chalmers to the Pacific (Lower Harbour). Lower and Upper Harbour are separated by Goat, Quarantine and Pudding Island. What makes the Lower Habour so attractive to scientists is that its water is completely exchanged with freshwater during a full tidal cycle offering perfect conditions for a high biodiversity on its sea floor.

We arrived at the Monarch’s moorage in the early afternoon. The crater remnants were enveloped by fog, the wind was blowing painfully and the rain wouldn’t stop for the rest of the day. It was time to toughen up. While the students got their first shots, Rob (Film Tutor) and I were greeted by skipper Buddy, whose face was covered with a beard that you wish a man of the sea to have – symbolizing experience and confidence – which was indeed needed in this nasty weather. Buddy was assisted by Leena, a woman from Canada, who loosened the ropes, lifted the anchor and gave the signal to hit out.

I was thrilled. I had seen the bay from many perspectives, from the top of Mount Cargill, the Soldier Memorial on the peninsula, from the comfort of my house and even Portobello, but this was my first time in New Zealand waters. I felt sorry for the girls working on their assignment in the pouring rain, but kiwis are tough and know how to handle any of New Zealand’s weather conditions. We were fortunate to be by ourselves on the Monarch, well it was off-season and kinda messy, giving us space to find good shots around the boat. 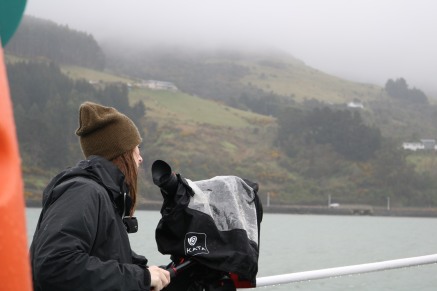 Out of the city harbour, Buddy explained that the aligned red poles indicated the centre line of the harbour, the end of the channel because the water on the side of the peninsula is shallow and was spared by excavating works of the 19th century. In low tide, the little bays of the peninsula turn into a feeding feast for shags and gulls. All ships are limited to travel between the red and the green poles that indicate the shore along Port Chalmers. On the water, different rules apply as on New Zealand’s streets: boat traffic moves on the right-hand side.

We passed Grassy Point and were now facing the three little islands ahead. Big tankers appeared out of the fog like ghostships you’d expect to see in the Bermuda Triangle. Coincidentally, it started to rain heavier which only made it harder to film or photograph. The fog blocked our view backwards on Dunedin. Ahead was Quarantine Island (Kamau Tarua), halfway point of the Otago Harbour.

Quarantine Island is self-descriptive. It has been Otago’s quarantine zone from 1863 to 1924 because New Zealand was troubled with several epidemics throughout its history. The strongest outbreaks were recorded during the 1870s and during WW1. Settlers and soldiers suffered from infectious diseases such as scarlet fever, typhoid, smallpox, polio, tuberculosis, measles, influenza and even plague from ship rats. Quarantine stations were a necessity because of highly sensitive children, as well as Māori were among most of the victims having less or no immunity against foreign diseases. Over 70 people are buried on Quarantine Island, some of them in unmarked graves. The isolation and mysteriousness of this place fitted right into the Bermuda Triangle-like atmosphere. But nice days do exist in Dunedin, as you can see on the picture below that I took in May when I visited the Marine Research Institute of the University.

Skipper Buddy steered the Monarch with 10 knots (18,5 km/h), as he suddenly had to turn the boat 360° due to a ship that had crossed our path and The Monarch began to swing in the waves. We passed Port Chalmers, a historic harbour town, where Robert Falcon Scott began his famous journey to the South Pole and we continued ours to Otago’s Lower Harbour. I was cold, and I didn’t intend to freeze to death such as Scott did, so I went inside to check out the Monarch’s interior and Buddy’s skipper cabin.

So Buddy went on and started to explain what his fancy machines were for. “A GPS helps to determine the speed over ground”. A deep sound radar was usually used at night, sending a fine-tuned, vertical beam (radio wave) to the seafloor. That is the reason why Leena also referred to it as “the fishfinder”. Of course, there was Buddy’s radio which is a must-have to communicate with the Monarch’s base, or if necessary with another boat. The last device measured the current wind speed which can be quite important on rough days like this one was.

Buddy continued and pointed ahead: “We are about one nautical mile away from the bay’s exit.” A nautical mile is 1.852m. All I could see was fog at the bay’s exit, not safe for us to go out there. We were unfortunate – the cruise was shortened due to the weather. Once at the exit near Taiaroa Head, one has the chance to see seals and sea lions, yellow-eyed penguins and albatross, as well as plenty other New Zealand sea species. Buddy told me he had seen all kinds of stuff out here: whales, dolphins (hector’s, dusky and bottlenose dolphins), blue sharks and a giant sunfish that once came up to the surface to bask in the sun. All I was able to see: one or two Otago shags near Goat Island. However, it was still a great day on the Monarch, toughening up like a kiwi in the wind and rain, offering me my first experience on New Zealand waters. And I didn’t get eaten by a shark, that’s good, right? Well, weather-wise, it can only get better from here, and I am looking forward to my next adventure on New Zealand’s waters.